A physical system and its dynamics can be described by mathematics. A few simple examples can be solved using pen and paper, but many real world problems are incredibly complex and require a computer to solve efficiently. Computers can perform thousands of mathematical operations per second, and therefore can solve complicated problems that would be impossible otherwise. Using a computer to solve maths that corresponds to a physical system is known as simulation. 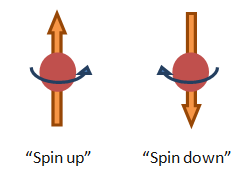 To simulate a quantum system, the phenomenon of superposition has to be taken into account. This is extremely bad for computers, as is evident from the spinning particle example. Even the world’s fastest supercomputers couldn’t perform non-trivial simulations involving more than 30 particles. And remember, these particles can only be in two physical states. Many real problems have more degrees of freedom, and physical quantities such as position and momentum can have infinitely many possibilities.

We use trapped ions as a controllable quantum system which can be used to simulate other quantum systems. The outer electron orbiting the atomic nucleus of the ion can be manipulated precisely using laser beams or microwaves, and can be made to spin in two different directions in the same way as in the quantum particle example. There are many exciting physical phenomena that can be investigated using this system. Two examples are being investigated in the group include 2d array of ion traps on a microfabricated chip to arrange the ions in a lattice structure. This arrangement mimics the structure of metals, in which spinning particles align to create permanent magnets, and there are many unsolved physical problems involving the dynamics of these spins that could be investigated using this experiment. Another simulation class makes use of a microfabricated chip trap where the ions are trapped in a ring configuration and can be moved around in a circle. This structure allows for the quantum simulation of Hawking radiation. Originally proposed by Stephen Hawking, the theory predicts that radiation should be emitted from the event horizon of a black hole. However, this radiation has never been observed.

There are a whole host of possible simulations that can be performed using trapped ions from all areas of physics, including effects of Einstein’s theory of special relativity, particle creation moments after the big bang and complex many-body phenomena such as quantum biology and quantum chemistry, all of which cannot be simulated on a classical computer. All of these examples provide unique research opportunities allowing trapped ion experiments to connect with problems from all areas of physics and science beyond.